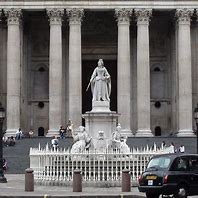 The former Holmhurst St. Mary site has been empty for some time, its houses the original Queen Anne Monument (1711/1712) (a replica can be found at St. Pauls Cathedral completed in 1885) which has fallen into disrepair over recent years. The monument itself is Grade II listed and was designed by Sir Christopher Wren and executed by sculptor Francis Bird for St. Pauls Cathedral, London.

The poor and unstable condition of the monument has been cause for concern and debate over a number of years. This original statue was purchased by Victorian writer Augustus Hare and moved to his house Holmhurst St. Mary, were it was re-erected in 1888. Over the last 125 years the sculpture has suffered further loss and decay. It has become a matter of urgency that the Queen Anne Monument is conserved and protected for the future generations.

As part of the ongoing project, Foreman Homes have undertaken the mammoth task of restoring the original monument to its former glory. Photo shows replica monument that is outside St. Pauls Cathedral London.